For the first time in 2021, President Buhari has presided over his first cabinet meeting for the year. 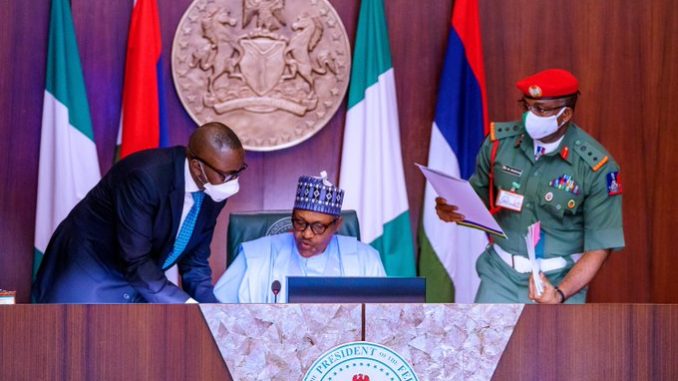 President Muhammadu Buhari is presiding over the first Federal Executive Council (FEC) meeting in the year 2021 currently holding at the Council Chambers of the State House, Abuja.

Vice President, Yemi Osinbajo, Secretary to the Government of the Federation, Boss Mustapha and Chief of Staff to the President, Prof Ibrahim Gambari are physically attending the meeting, which is also the 30th to be held virtually.

Nine ministers are also attending the meeting. They are the Ministers of Information and Culture, Lai Mohammed, Attorney General and Minister of Justice, Abubakar Malami, Police Affairs, Muhammadu Dingyadi and Transportation, Rotimi Amaechi.

The Head of Civil Service of the Federation, Folasade Yemi-Esan and other Ministers are participating in the weekly council meeting from their various offices in Abuja.

The council meeting was preceded by the swearing-in of three members of the Code of Conduct Bureau and a member of the Police Service Commission.

They include Ehiozuwa Johnson Ogbonayinma, Babtunde Olayinka Balogun and Benedict Umeano for the Code of Conduct Bureau and Onyemuche Nnamani of the Police Service Commission.

Also, before the commencement of the weekly cabinet meeting, a minute silence was observed in honour of two former Ministers, Jubril Martins Kuye and Bala Kaoje, who died recently.

While Bala Kaoje, who died on Tuesday 19th January, at the age of 60, was Nigeria’s Minister of Sports in 1999.

Politics Brainnews - October 27, 2021
0
A minister has revealed that petrol subsidy will stay till June 2022. This was made known by Finance, Budget and National Planning Minister Mrs. Zainab...