A fellow of the Nigerian Society of Engineers (NSE), Mr Sunday Egbiki, has raised an alarm that 31 Nigerian cities risk being washed away by flood.

Egbiki, a lecturer in the Maritime University, Delta State, raised the alarm while delivering a lecture at a virtual/physical conference of the 2021 Engineering Week organised by the Apapa Branch of NSE.

Speaking on the topic “Green Buildings and Infrastructures: Panacea for Mitigating Climate Actions,” he advised policy makers to pay more attention to flooding, which he said was more dangerous than building collapse.

According to him, Lagos State, Kogi, Niger, Benue, Nassarawa and Plateau are among the 31 states at risk of being washed away by flooding.

He called for urgent measures to avert the looming disaster.

According to him, when buildings collapse, casualties are usually minimised to those within the structure, but flood washes off everything including cities within its part.

He added that flood regulatory bodies should be inaugurated nationwide, as flooding was not caused by impact of rainfall alone but by climate change affecting hydrological system.

He called on Federal and State governments to adopt Integrated Flood Management System by embracing green building and green infrastructure.

He said trends had moved from flood control to flood management, which freed channels for flood to discharge into rivers and other water bodies without obstructions.

“Out of the 36 states in Nigeria, it is only five cities that are not affected by flooding.

“The Federal Government should first of all take the green initiative by setting up flood managers that should be moving from one state to another,” he said.

He said the government should move away from being reactive to become proactive in averting flood, adding that, economic well being of Nigeria would be determined by positive climate actions.

“Each state should have their own flood managers that will be giving advice to government,” he said.

The guest lecturer defined green buildings as ways of using renewable energy and other construction conservation methods to achieve less carbon footprints in homes and the country at large.

Citing Lagos State as an example, Egbiki said several flood plains had been built up resulting in constant flooding being experienced in the state.

ALSO READ:  Relief Coming For Lagos Residents As State Steps Up Cleaning Of Canals Over Flooding

He said the Lekki axis, which was expected to be a buffer zone had almost been entirely built up causing the area to be currently lying two meters below sea level warning that disaster looms.

He, however, commended the Lagos State government for recently training 30 green construction experts who would in turn train others to ensure green building and infrastructure to mitigate climate action.

The guest lecturer warned that Germany, which had not experienced massive flooding in the past recently had some whole communities washed away because of adverse effects of flood.

According to him, Net Zero Carbon Buildings will ensure adoption of construction methods that lowered energy and water consumption in houses thereby reducing carbon footprints.

He said green infrastructure could also be adapted in the construction of roads, drains and other major infrastructure citing Netherlands lying six feet below sea level as an example.

He explained that the government of Netherlands had to pay compensations and demolished all buildings along its flood plains and turned the area into a tourism site thereby earning revenue from solving a major problem.

He called for partnership between government, industries and the academia towards positive climate action to help Nigeria key into SDG goals 11 and 13 to save the nation from disaster.

He said energy consumption would grow by 37 per cent globally by 2035 while developing countries including Nigeria will record population growth of 96 per cent, hence the need to work on the achievement of SDGs which targets zero net carbon by 2030.

Chairman of the Apapa Branch of NSE, Mr Christian Ufot, said the branch was passionate about resolving perennial flooding in Lagos and other states, hence the choice of the topic for its weeklong programme. 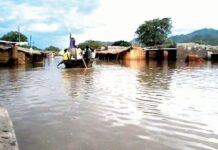 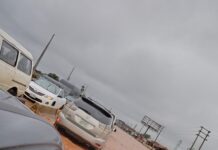 Lady Swept Away By Flood After Heavy Downpour In Imo (Video) 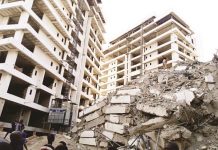 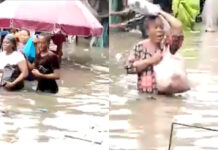 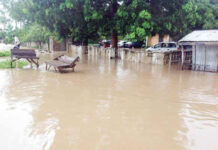