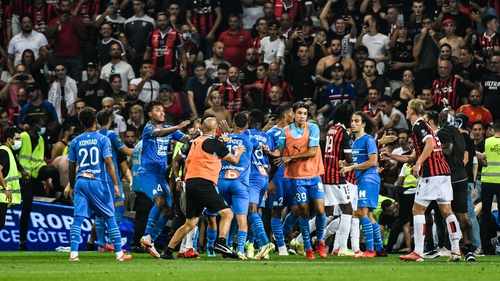 Nice supporters threw water bottles at Marseille forward Dimitri Payet when he was about to take a corner and, after the forward hurled one back at them, a full scale brawl ensued when some of the fans rushed on to the pitch.

Both teams retreated to the tunnel and play was held up for over an hour before Nice president Jean-Pierre Rivere appealed to Nice supporters over the sound system for calm and the home players returned to the pitch to warm up.

Dimitri Payet was hit by a missile thrown from the crowd, and when he threw it back it all kicked off…

The match was suspended as chaos descended on the pitch, with the managers even getting involved! PIC.TWITTER.COM/SKK7VOLOIA

But Marseille refused to join them, with French daily L’Equipe reporting that visiting players Matteo Guendouzi and Luan Peres were injured in the fighting.

Nice were 1-0 up when play was interrupted in the 75th minute, with Swedish striker Kasper Dolberg firing them ahead in the 49th after Marseille missed a string of first-half chances 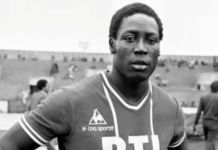